This document is designed to quickly get you up and running in a vSphere configuration that consists of multiple vCenter or a multiple Datacenter environment via using zones.

Deploying Kubernetes Cluster on vSphere with CPI and CSI

There exist 2 significant issues when deploying Kubernetes workloads or pods in a mutli-vCenter or single vCenter with multiple Datacenters. They are: 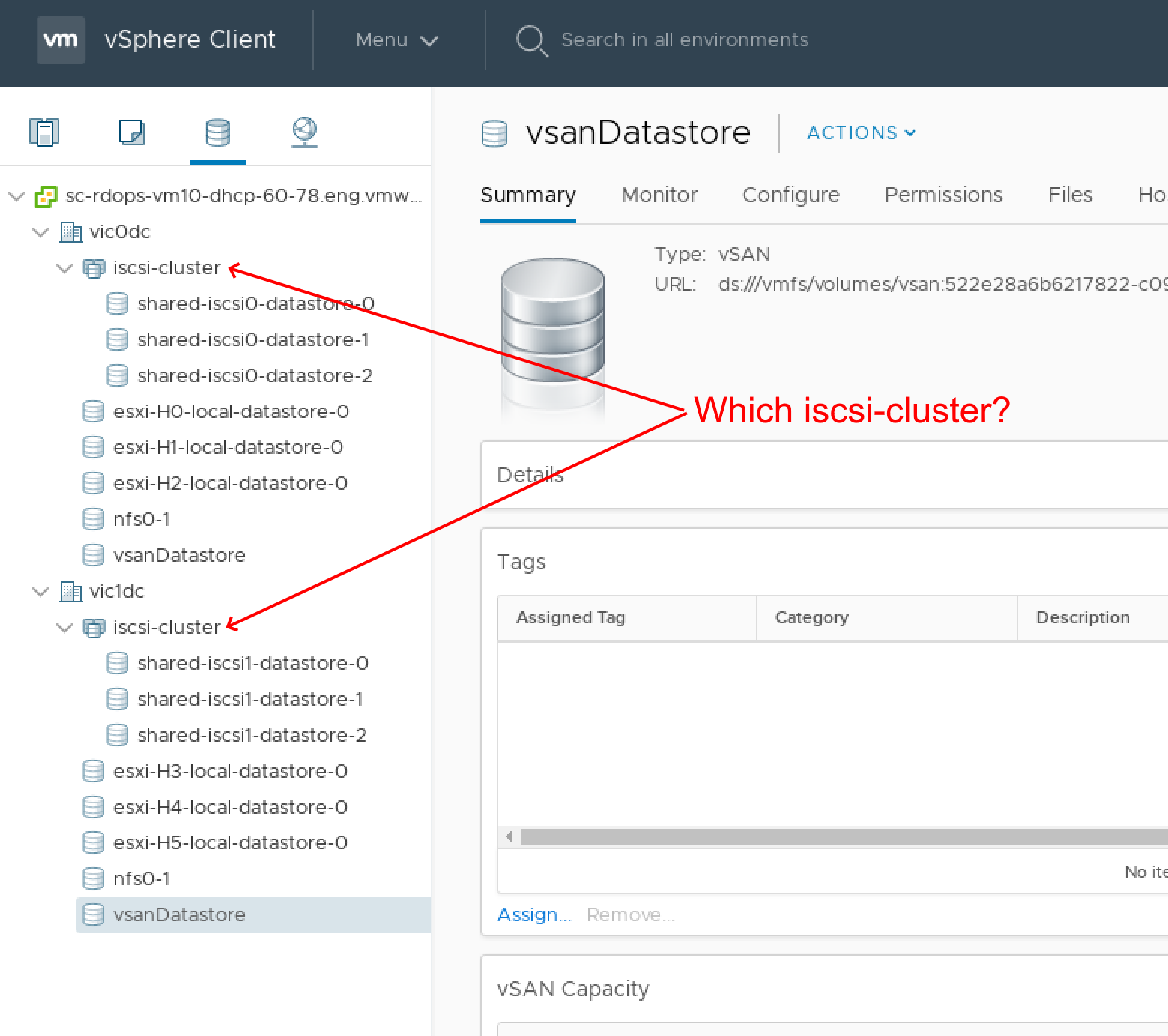 There needs to be a mechanism in place to allow end-users to continue to use the human readable "friendly" names for objects like datastores and datastore clusters and still be able to target workloads to use resources from them. This is where the concept of zones or zoning comes in. Zones allow you to partition datacenters and compute clusters so that the end-user can target workloads to specific locations in your vSphere environment.

This section outlines some optimal configurations for Kubernetes zones in your vSphere environment/configuration. The implementation for zone support in the CPI and CSI driver are quite flexible but there are some configurations that can take advantage of features in vSphere and thus providing certain benefits. Here are a couple of common deployment scenarios for zones. If you cannot roll out or deploy zones in some of these suggested configurations, it might be worth consulting someone with familiarity with how zones are implemented.

An ideal configuration is creating a zone per cluster. It follows that datastore and datastore clusters access be tied to the compute nodes within a given cluster. The main reason for this is to take advantage of the High Availability (HA) that clusters offer as well as features like vMotion and etc. Example diagrams or configurations appear below. Zones per datacenter can work as well, but there are some very important design considerations when doing this. If this deployment strategy is taken, it is important to understand that all compute nodes in that zone aka datacenter have access to provision VMDKs from a given shared datastore. The reason for this is CSI driver uses zones in order to target Kubenetes pods or workloads when provisioning external storage. Example diagrams or configurations appear below. Pitfalls: Zones as they Relate to Storage

Here is a great example of a mistake you don't want to make. In a multi-Datacenter or multi-vCenter environment, you need to use to zones in an effective way especially when it comes to the use of persistent storage. The picture below shows an example of how zones can be incorrectly used.

We have two clusters in Datacenter 1. If we deploy a pod to Zone Engineering what cluster will the pod land on? If you don't care, then this topology will work, but if you want to run a stateful pod with some storage to be provisioned, then placement really does matter. The StorageClass explicitly calls out from what datastore you want to provision a storage, or in our case a VMDK, out of. So placement in that case is very important and the zone configuration here is insufficient to handle that deployment scenario.

Some important takeaways for implementing zones:

Steps that will be covered in order to setup zones for the vSphere CPI and vSphere environment/configuration:

Note: CPI has its own vsphere.conf files. The following modifications need to be made in its configurations.

The zones implementation depends on 2 sets of vSphere tags to be used on objects, such as datacenters or clusters. The first is a region tag and the second is a zone tag. vSphere tags are very simply put key/value pairs that can be assigned to objects and instead of using fixed keys to denote a region or a zone, we give the end-user the ability to come up with their own keys for a region and zone in the form of vSphere Tag Catagory. It just allows for a level of indirection in case you already have regions and zones setup in your configuration. Once a key/label or vSphere Tag Category is selected for each, create a labels: section in the vsphere.conf then assign tag names for both region and zone.

NOTE: If you are using CPI version 1.1.0 or earlier, please use the INI based cloud configuration as outlined in the Deploying a Kubernetes Cluster on vSphere with CSI and CPI documentation.

NOTE: For the INI based configuration the zones configuration would appear as the following at the end of your cloud-config file:

2. Creating Zones in your vSphere Environment via Tags

The region tag is just a construct that allows one to make a grouping for a specific set of resources. It could be used to indicate something like a geographic location like a country or perhaps a specific datacenter. This label is an arbitrary grouping that you decide on. The zone tag is another construct that allows you to further subdivide resources within a region. As an example, using the countries as a region, the zone could indicate a specific datacenter out of a list in that region. In the second example of using a datacenter as a region, you might use a zone to indicate a specific rack within the datacenter or even just a cluster within that datacenter. Then all hosts and subsequently all VMs acting as Kubernetes worker nodes under that tagged datacenter or cluster inherit the tags of those parent objects. How one chooses to group regions and zones is completely based on how you want to identify a specific group of resources.

There are many options for creating vSphere tags. One such method would be to use govc. All the examples below will make use of this method. You could also create tags by accessing the vSphere REST APIs directly or by using the vSphere UI.

NOTE: The example commands below assume that you have exported the GOVC_URL before running said commands:

Using the example above, if it is decided that k8s-region and k8s-zone are to be used for your Category labels, then you can create those vSphere Categories using govc by running the following command:

Say there are 2 regions in the US and EU that cover our vSphere environment, we can then create 2 region tags k8s-region-us and k8s-region-eu using govc by running the following command:

Now let's assign the region and zone tags to each of the datacenters in the vSphere environment by running the following command:

And there you go! All setup with the correct tags.

NOTE: Since CPI supports multiple vCenter Servers, the datacenters in the US and EU could be distinctly different. In that case, the govc commands would be identical with the exception of replacing the proper vCenter username, password, and IP address for each command.

Now that we have set the regions and zones within the vSphere environment, we can now target a specific region/zone to deploy a Kubernetes workload or pod into. If a persistent volume is required for that given Kubernetes pod, we need to update the StorageClass with the region and zone information that the particular datastore is in. You can refer to the procedure in this doc, which provides some example YAMLs and explanations of each step.